A tribute to Madurai Shanmugavadivu Subbulakshmi: a celebration of her unparalleled musicianship, her quiet, unostentatious life, her service to the nationalist cause and the Indian people, and her timeless gift of giving …. 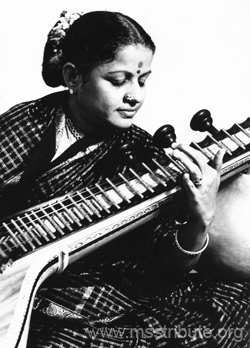 Much has already been written about this charismatic legend of Carnatic classical music. To list her accomplishments is to marvel at the magnitude of her achievement and reach. MSS was the first woman musician who received the coveted Sangita Kalanidhi title (1968) awarded by a panel of classical music practitioner-experts from the Music Academy, Chennai, India, Carnatic music’s mecca. Her singing voice was recognized as a treasure by luminaries such as Mahatma Gandhi, Jawaharlal Nehru, and Sarojini Naidu, even as she gave freely of it to serve the nationalist cause. When told that MSS could not fulfill his request to sing his favorite bhajan because she did not know it at the time, Mahatma Gandhi said: “I should prefer to hear it spoken by Subbulakshmi than sung by others.” Later, she captured the imagination of an array of musicians and critics in the west – Yehudi Menuhin and Zubin Mehta among them. At pivotal moments in her career and independent India’s history, she performed at the Edinburgh Festival, Carnegie Hall, and at the United Nations to critical and popular acclaim. MSS is perhaps the only Carnatic musician who is popular – known, even – in north India, earning the respect and admiration of such stalwarts of the Hindustani tradition as Ravi Shankar, Bade Ghulam Ali Khan, Siddheshwari Devi, and Vilayat Khan. She was also a film star, winning the hearts and ears of Tamil and pan-Indian audiences with her portrayal of the bhakti poet-saint Meera in the 1940s.

Aided by the redoubtable efforts of husband and Indian nationalist Thiagarajan Sadasivam and his illustrious journalist collaborator Kalki Krishnamurti, MSS raised millions for charitable organizations through her concerts. Believing that music should not be used for personal gain, Subbulakshmi and Sadasivam donated the proceeds of all her concerts into various charitable endowments over a lifetime, a life-long commitment to philanthropy and those in need they were never to second-guess or regret, in private or public, during their lifetimes. In fact, for those lucky enough to know her, MSS was simply Kunjamma, MS Amma, or Ammu Patti, the gentle, retiring, disarmingly innocent human being who lived a life of spartan rectitude and unswerving loyalty to her loved ones. Every single person – friend, acquaintance, family member, awestruck fan – who came to the Sadasivams – modest home, its otherwise austere living room bedecked with black and white photographs from the nationalist era, was warmly received and treated with the same unfailing courtesy and solicitude no matter his or her status or rank. 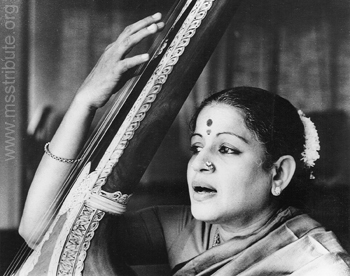 Though she never neglected those around her, MSS’s life was one of of singular artistic pursuit, marked both by a fidelity to musical and multilingual lyrical traditions and the capacity for sparkling, spirited innovation always in keeping with classical precepts. Her contribution to Carnatic music bespeaks both intuitive gift and the careful, lifetime nurturing of her vocal technique. This precise combination of innate gift and attentive nurture in MSS’s music has yielded what rasikas all over the world extol as moments of sheer spiritual transcendence during her concerts.

It is safe to say that MSS’s veneration in India goes beyond traditional musical circles and far outstrips anything achieved by any other classical musician of our times. Indian Hindus all over the world begin their mornings with MSS’s recital of the Sri Venkatesa Suprabhatam’the hymns chanted at dawn to wake Balaji, the deity at the holy sanctum of Tirupati–and her rendition of the Vishnu Sahasranamam. MSS was not only the first female recording artist to recite verses traditionally the domain of brahmin male exponents, her unmistakably resonant intonation and chaste diction have influenced the style and manner of their delivery in temples as well as formal and informal religious gatherings since. Bhajans by bhakti poet saints Surdas and Mirabai, nationalist hymns, and Tamil songs such as Katrinile Varum Gitam have been made famous through her distinctive, piety filled performances, visibly transporting all listeners beyond the temporal realm. 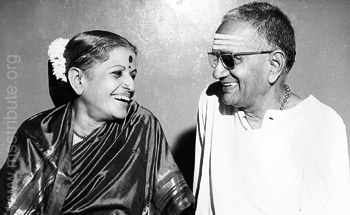 This attempt at bringing together all our favorite memories of MSS is a response to the scores of letters that poured in from all corners of the globe after her passing in December 2004. As friends and family of MSS, we would like showcase the life-work of a transcendent genius whose humility and simplicity are an integral part of her legacy.

Join us on an interactive odyssey tracing the evolution of a legend: the progression of the shy girl from Madurai to Sangita Kalanidhi and Bharat Ratna. We hope with this website to celebrate MSS’s life and achievements through unique memories of her performances and person, aided in this journey by books, articles, photos, rare speeches, letters, and interviews brought together for the first time in a digital collection.

This space is intended as a gathering place for MSS fans, a portal through which we exchange information and anecdotes. While our purpose is not definitive biography or scholarship, we hope that intellectuals and artists interested in the musical traditions of India and MSS’s oeuvre see our portal as a starting place for their endeavors. We also hope that the material presented here spurs all fans of her music, ranging from novice to expert, to share reminiscences and thoughts. We trust that our collective and collaborative effort will allow future generations to learn about and appreciate this great musician, freedom fighter, and philanthropist. 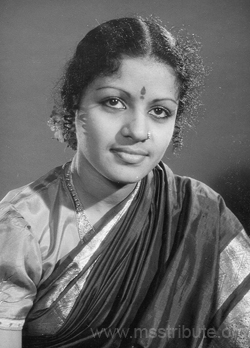 If you are an admirer or a friend or a critic, a person who reveled in MSS’s bhakti-soaked music or were in some way touched by her life, we invite you to add your comments and anecdotes for others to share.

This website would not have been possible but for the support of MSS-Sadasivam family members and friends. We must in particular acknowledge the following: V. Shrinivasan (son of Radha and Viswanathan) for his vision and drive; Sri Athmanathan for his support and for generously providing pictures from his collection; Akhila Ramnarayan and Sumithra Ramachandran for their enthusiasm and contributions; Gowri and V. Ramnarayan for their support and permission to use previously published writings; Sruti magazine and Sukanya Sankar for immediately giving us permission to reproduce content from previous issues and for generous logistical support; Thangam Ananthanarayanan for access to photographs, documents and memorabilia from her collection as well as her help with indexing photographs; Navaneet Venkatesan for his help in compiling the discography; S.T. Rao for help in selecting and compiling samples of music; Seetha Ravi for her support and contribution; Kamakshi Mallikarjun (daughter of Thangam and Ananthanarayanan) for being on board from the start, and for her unflagging dedication and hard work; and all other family members and friends whose blessings make this effort possible.

While it would be difficult to emulate the perfection of MSS’s music and life, our aim with this website is to cherish and honor her memory. That said, this site is a work in progress, and the administrators look for your help and active support in improving its content. Please do share your thoughts and suggestions as well as any materials you may have in your collections; your pictures, recordings and anecdotes.