Sep 16, 1916 Subbulaksmi is born. She has two siblings: Her brother Saktivel is 2 years older and siter Vadivambal is 6-7 year younger. 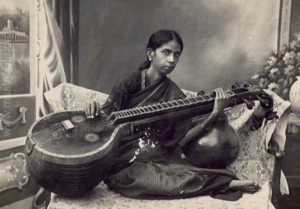 Debut at Madurai Sethupati High School. Sang a Marathi song Anada Ja when her mother requested her to sing.

“The first stage appearance? “When it happened, I felt only annoyance at being yanked from my favourite game – making mud pies. Someone picked me up, dusted my hands and skirt, carried me to the nearby Sethupati School where my mother was playing before 50 to 100 people. In those days that was the usual concert attendance. At mother’s bidding I sang a couple of songs. I was too young for the smiles and the claps to mean much. I was thinking more of returning to the mud.”

Young Subbulakshmi with thick curls and a puff sleeve blouse

First Recording – Maragatha Vadivum ( Raga : Chenchurutti) with Shanmugavadivu playing veena and MS singing. Released by the Twin recording company. Vinyl Disc has Oothikuzhiyile on other side.

“You can see it in the old pictures,” she laughs. “A side parting in thick curls pressed down with lots of oil, a huge dot covering most of my forehead, the half saree pinned to the puff-sleeved blouse with long brooch and longer safety pin, eardrops, nose-rings and bangles of imitation gold… Oh, I forgot. The long plait was tied up with a banana stem strip! Or a ribbon which never matched.”
Read article>> 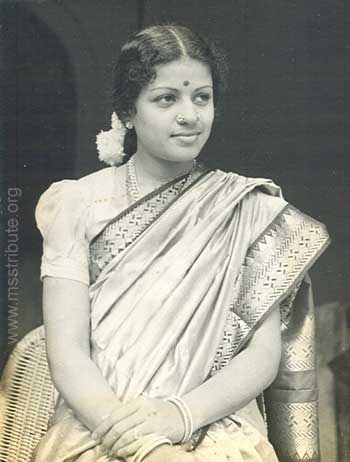 “Of her debut at the Madras Music Academy when she was 17, a connoisseur wrote: “When she, with her mother by her side (who played the tambura for the daughter), as a winsome girl in her teens, ascended the dais in 1934 and burst into classical songs, experienced musicians of the top rank vied with one another in expressing their delight in this new find.” Chembai Vaidyanatha Bhagavatar came forward with loud hyperboles. Tiger Varadachariar nodded approval. Karaikudi Sambasiva Iyer was to say later: “Child, you carry the veena in your throat.”
Read article>>

“Semmangudi’s acquaintance with M.S.’ husband, T. Sadasivam, began with their serving as judges in the `khadi’ section of the swadeshi exhibition during the Mahamakham festival at Kumbakonam in 1933. Semmangudi claimed not only M.S. but also Sadasivam as his disciple, having taught him to play cards. At times he even joined M.S.’ concert tours – as Sadasivam’s rummy crony. ” 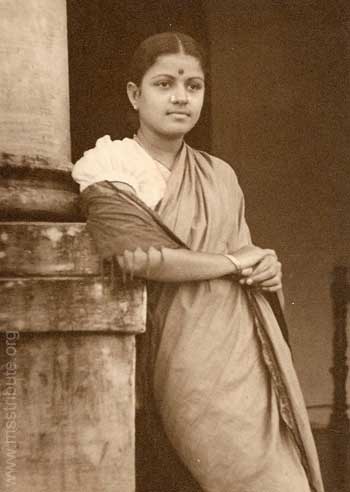 A Young Subbulakshmi in an informal Photograph

“Kunjamma (as she is known to those close to her), brought up with all the rigorous strictness that her mother could impose upon her training in art as in life, had sung at a wedding in the household of Dakshinamurti Pillai, the venerable percussionist from Pudukkottai. The event had drawn a galaxy of artists – including the upcoming Semmangudi Srinivasa Iyer, Musiri Subramania Iyer, Chembai Vaidyanatha Bhagavathar, Rajamanickam Pillai, Rajaratnam Pillai, Palghat Mani Iyer, G.N. Balasubramanian and the Alathur brothers.

The next day, in the midst of this starry assembly, Dakshinamurti Pillai suddenly smote his head with vehemence. “Andavane!” (oh God!) How will you save your throats for a lifetime if you engage in vocal gymnastics? Leave all that to us drummers. Singers must emphasise the raga and the bhava so that you preserve your voice and let it gain in timbre. That little girl there, she knows this already. Didn’t we hear her yesterday? Wasn’t it satisfying? Touch our hearts?”” At that public praise, Kunjamma shrank even more behind her mother in the corner. ”
Read article>>

An Early Picture of MS and Sadasivam 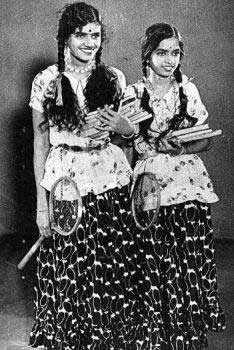 “Subrahmanyam introduced a number of artists to a career in films, foremost among them being the Carnatic music stalwart M.S. Subbulakshmi. Seva Sadhanam championed the cause of women’s equality. Based on a novel by Premchand, the film was a bitter attack on the dowry system, which often compels poor young girls to marry older men. The film forcefully discussed the havoc caused by the incompatibility between such couples and sympathised with the victims. Subrahmanyam introduced M.S. Subbulakshmi as an actress in the film, which was a big success.”
Read article on Papanasam Sivan who composed multiple songs for the film>>

Marriage to T Sadasivam at Thiruneermalai

Marriage to T Sadasivam at Thiruneermalai 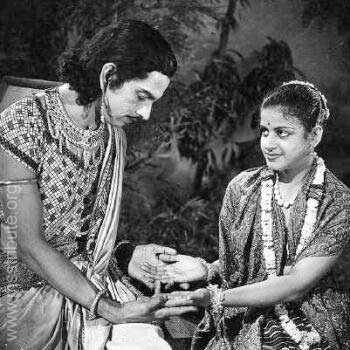