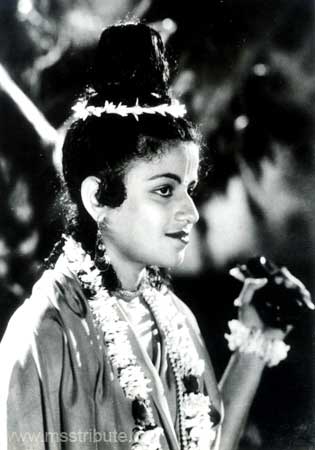 MS as Narada in the Film Savithri

“Profile of Ellis R. Dungan by Randor Guy : In 1941, Rao went to Calcutta a make a Tamil musical of historic interest.

A mythological, Savitri, attracted considerable attention. The title role was played by the Marathi and Hindi star, Shantha Apte. Making her act in a Tamil film was a daring move made by Rao, which generated public interest in the film even during its making. Unlike the artistes of today, she insisted on speaking and singing in Tamil. Rao sent a Tamil tutor to Pune to get her to learn the language. The project was put on the backburner for nearly a year until Shantha Apte was ready to speak and sing on her own. Such was her devotion to her profession.
Another innovative feature, which raised public interest, was Rao’s move to cast M. S. Subbulakshmi in the male role of Narada. M.S. was always popular and her role as the male sage became the talk of the town. Savitri had many songs, mostly sung by M.S. and some by Shantha Apte. Music was by Papanasam Sivan and Kamaldas Gupta. ”

Founding of Kalki magazine as a result of funds from Savithri

Move to Kalki Gardens at 20 Guruswamy Mudaliar Road, formerly called Sladen Gardens.”Enraptured by tales of the Mahatma’s walks outdoors and councils indoors, T.Sadasivam had bought Sladen Gardens from Mammen Mappillai, through the agency of `Aryabhavan’ Sharma, to house the Kalki magazine. The first floor became his home.

MS and Sadasivam seen at a prayer meeting with Mahatma Gandhi

MS in the film Meera

Making of the movie Meera>>

The making of “Meera” was studded with interesting incidents. ‘Kalki’ Krishnamurthy, who wrote the script and a few of the immortal songs, accompanied the crew and recorded the episodes. Excerpts, translated by GOWRI RAMNARAYAN.
See Gowri Ramnarayan Article>> 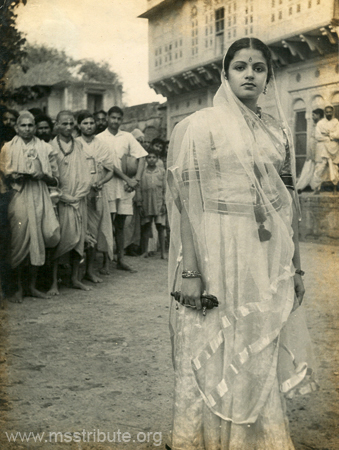 MS in one of the last scenes in the film

Browse the programme brochure printed for this performance>>

See Article by Anandhi Ramachandran about their arangetram>>