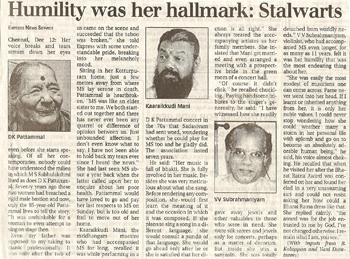 Her voice breaks and tears stream down her eyes even before she starts speaking. Of all her contemporaries, nobody could have understood the milieu in which M S Subbulakshmi lived as does D K Pattammal. Seventy years ago these two women had breached a rigid male bastion and now, only the 85-year-old Pattammal lives to tell the story. “It was unthinkable for a woman to even attempt to sing on stage then. Even my father was opposed to my taking to music professionally. It was only after the two of us came on the scene and succeeded that the taboo was broken,” she told Express with some understandable pride, breaking into her melancholy mood.

Sitting in her Kotturpuram home, just a few. metres away from where MS lay serene in’ death, Pattammal is heartbroken, “MS was like an elder sister to me. We both started out together and there has never ever been any quarrel or difference of opinion between us, just unbounded affection. I don’t even know what to say. I have not been able to hold back my tears ever since I heard the news.” She had last seen MS about a year back when the latter called upon her to enquire about her poor health. Pattammal would have loved to go and pay her last respects to MS on Sunday, but is too old and frail to move out of her home.

The guru on his sishya

MLV on MS
Scroll to top