The following is a partial list of the many musicians, poets and others who were influential in the musical life of M.S. Subbulakshmi. Having been trained initially by her mother, the young Subbulakshmi is said to have learned from the many musicians who were frequent visitors to Madurai and to their home. This thirst for learning stayed with MS all through her life as she expanded her repertoire and enriched her technique by learning from a large number of musicians and scholars; be it Tyagaraja’s Vidulaku from Turaiyur Rajagopala Sharma or Dwijendralal Roy’s Dano Danya from Dilip Kumar Roy. Remarkably, and early in her career, she settled into a distinct and inimical style of her own; a style marked by bhava carried with a rich voice, crisp diction, sruthi alignment, a deceptive simplicity which reached the lay listener and the connoisseur alike.

It would be impossible to list all these individuals here and now. Visitors to this website are invited to add their comments and provide information to enrich this content. Please send us your comments and contributions through the contact page. You may also add your comments and suggestions on the blog set up for this purpose. With your help, and with the passage of time, we hope to fill these pages. 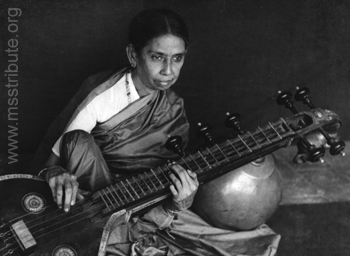 Subbulakshmi’s family was steeped in music. Her maternal grandmother Akkammal was a talented fiddler. Her mother Madurai Shanmukhavadivu was an accomplished veena player who had learnt music from Karur Venkatramana Bhagavatar. She was among the first musicians of the fair sex to be recorded on shellac ‘plates’. Some collectors may still have her 78 rpm recordings of Ghanam Seenayya’s Kuranji padam Sivadeekshaparu, a ragamalika and a tanam. It was but natural Subbulakshmi’s first musical mentor should be Shanmukhavadivu. Besides, the home she grew in reverberated with the sound of music day in and day out. Many a stalwart of music would drop in for a visit and the child MS – fondly called Kunjamma-heard not only music but also a great deal of chatter about it. Elder brother Saktivel and younger sister Vadivambal were also learning music. MS absorbed music osmotically almost. Her promise was clearly evident and her mother began early to prepare her for a career in music. She took her along to her own concerts, to sit and listen, and later on to sit beside her and play the veena along or to sing along. Yes, her mother had taught her to play the veena as well as to sing.

When MS was honoured with the Sangita Kalanidhi title by the Music Academy of Madras, she acknowledged her debt to her mother, as well as to others who had taught her music or songs. Among the latter, she said two specially should be reckoned as her gurus, namely, Musiri Subrahmania Iyer and Semmangudi Srinivasa Iyer. He is the Pitamaha of Carnatic music. Nine decades of living by, because of and for music has earned Semmangudi Srinivasa Iyer this respectful and affectionate accolade…

Among the others who helped her along the way, the earliest, besides MSS’s own mother, was Madurai Srinivasa Iyengar. He was the elder brother of the better known Sangita Kalanidhi Madurai Sesha Iyengar and a disciple, like his brother, of Namakkal Narasimha Iyengar. Seithur Sundaresa Bhattar was another early mentor. He was a violinist who was retained by the Seithur zamin in Ramanathapuram district, as a palace vidwan. Mayavaram V. V. Krishna Iyer, more popular as a teacher than performer, was another who taught MS.

MS learned many of Sivan’s compositions, such as the majestic Kartikeya Gangeya (Todi), from the composer himself. Kaa Vaa Vaa in Varali was another MS favourite set to tune by Sivan. Sivan also composed music for songs in two MSS films: Seva Sadanam and Meera.

The 110th birth anniversary of Papanasam Sivan, musician, lyricist, composer and actor, falls on September 26… In recent years two of his film songs, “Maa Ramanan Uma Ramanan…” and “Manamey Kanamum…” are sung regularly by Carnatic musicians in their concerts and have won popularity. Indeed not many are aware that… 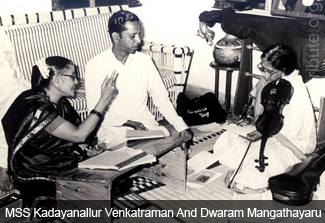 Disciple of Semmangudi Srinivasa Iyer, Kadayanallur Venkatraman was the composer who collaborated most closely with MSS in the later stages of her career. Among the many pieces that he composed are the Annamacharya composition Bhavayami Gopala Balam, Kurai Onrum Illai , Enta Matramunu, and many verses from the Balaji Pancharatnamala. Today, many of this shy and retiring individual’s pieces are sung the world over by people who often don’t even know his name…

M.S. Subbulakshmi’s brother Saktivel was a considerable influence in MSS’s life. He was someone whose musicianship she always admired and from whom she learned to play the mridangam in her early years, a skill that considerably advanced her tala and swara technique as a vocalist.

S.V. Venkatraman composed music for songs in the film Meera as well as songs such as Vadavarayai Matthaki that became an enduring part of MSS’s oeuvre.

“Meera” was a musical feast with MS singing almost all the songs. Many songs became hits and the most famous of them all, “Kaatrinile Varum Geetham” (lyrics-Kalki Krishnamurthi) is an immortal melody of Indian cinema. Its tune and melody were taken from a song by the famous Bengali singer, Juthika Roy, whose gramophone records…

‘Piano’ Vaidyanathan, as he was known, composed music for songs in Sakuntalai and, Meera as well as the iconic Hari Tum Haro. Many family members and friends remember Vaidyanathan as a familiar figure playing and composing on the Steinway baby grand at the Sadasivam’s family home…

It was here (in Kalki Gardens) that Sucheta Kripalani called to ask MS for Gandhi’s favourite verse from Meera, and added that “Bapu prefers to hear you speak the words rather than hear someone else sing them.”

Vasant Desai composed the music for the famous benediction Maithreem Bhajata with which MSS concluded all her concerts. The Sanskrit lyrics were written by the Sadasivams’ longstanding spiritual guru Chandrasekharendra Saraswati, the Paramacharya of Kanchi…

At Sadasivam’s urging, the celebrated vocalist T. Brinda helped MS refine her technique in singing padams and javalis by instructing her in the Veenai Dhannamal tradition of characteristically weighty gamakas and mellow tempo. A few rare radio recordings of MSS and Radha singing Kuvalayakshiro and Paiyyada reflect this legacy.

Sangeeta Kalanidhi Justice T L Venkatarama Iyer took pioneering efforts to learn and teach Dikshitar’s kritis. He interacted closely with Ambi Dikshitar and Vedanta Bhagavatar. Dr. Raghavan was instrumental in the publication of the Sangeeta Sampradaya Pradarsini and also for the periodic publication of Dikshitar’s kritis in the journal of the Music Academy by Sundaram Iyer. Venkatarama Iyer taught several disciples, prominent among them being Sangeeta Kalanidhis D K Pattammal and B Rajam Iyer.”

It was from this renowned contemporary and exemplar of Carnatic music that MSS learned and made her own songs such as Gopalaka (Revagupti), Devi Brova ( Chintamani), and Maayamma (Ahiri)…

M. S. Subbulakshmi once said, “Nedunuri garu, just for this one song in Revathi “Nannatu Batuku Natakamu” (an Annamacharya kriti) I think you should be awarded the Sangita Kalanidhi.” Nedunuri returns the compliment gracefully, “But, the Annamacharaya songs that I tuned attained popularity because she sang them”…

Veena vidwan K.S.Narayanaswamy was a frequent visitor to Sadasivam’s family home. Veenai Mama, as he was affectionately known by family members, and his wife spent many months as guests of the Sadasivams, and MSS, Semmangudi and he took part in many informal singing sessions. MS and he would also often play veena together. 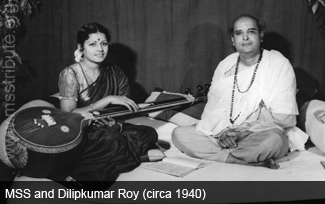 In a collaboration of titans, Dilip Kumar Roy—son of poet-playwright-composer Dwijendralal Ray — composed and taught MSS many of the songs in the Hindi version of the film Meera. The film propelled MS to national recognition. MSS always thought of him as a mentor and guru, while Roy himself was amazed at the purity of her voice and her extraordinary singing ability. There is a lovely little vignette told by him (as retold by others) that he received special attention at local coffee houses in the south when the proprieter learned that he was collaborating with MS Subbulakshmi…

Siddheshwari Devi taught MSS Hindustani scales and thumris as a visitor in the Sadasivam’s family home, taking great joy in her disciple’s piety and pitch-perfect rendition of complex progressions at lightning speed…

Agnihotram Thathachari Iyengar’s Sanskrit tutelage proved invaluable for MSS in her now-celebrated recording of the Vishnu Sashranamam, the thousand names of Vishnu.

Ananthasayanam Iyengar did the same for her recording of the Venkatesa Suprabhatam, chanted in honour of Balaji, the deity at the Tirupathi temple in Andhra Pradesh, and now heard all over south India in homes and public venues. R. Ganapathy was chief consultant in the process of selecting Sanskrit slokas for iconic viruttams such as Om Nama Pranavarthaya and Kara charana kritamva, with which MSS set the stage for main compositions in concerts.

This Chennai based western classical musician arranged the English hymn sung by MSS and Radha at the 1966 UN General Assembly Concert; the lyrics were written for the occasion by nationalist and close associate of the Sadasivams, C Rajagopalachari…

Patti – A Collection of Reminiscences