At the Philippines for receiving the Magsaysay Award

“Citation by the Magsaysay Award Foundation – Excerpt” In April 1944, after five successful benefit performances given for the Memorial Fund honoring Gandhi’s wife, Kasturba, SUBBULAKSHMI ‘s voice became an instrument for public causes. Receipts of concert halls filled to overflowing and open amphitheaters often packed with tens of thousands paying only four annas each (three U.S. cents) so as to deny no one the joy of her songs have been given to constructive works. Equivalent to over one million U.S. dollars, her contributions have benefited foundations for the poor, hospitals, orphanages, schools, and music and journalism institutes. While becoming the idol of millions, this lady has remained deeply religious, unpretentious and almost childlike in her simplicity.

In electing Srimati M. S. SUBBULAKSHMI to receive the 1974 Ramon Magsaysay Award for Public Service, the Board of Trustees recognizes her exalting rendition of devotional song and magnanimous support of numerous public causes in India over four decades.

Tirupathi starts to broadcast MS Venkateshwara Suprabhatam at the temple

MS with Accompanists Radha Viswanathan, Kandadevi Alagiriswamy and Guruvayur Dorai before 1977 US tour 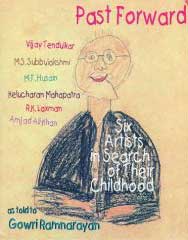 MS recounts her childhood in Past Forward by Gowri Ramnarayan

Childhood details enumerated in the book Past Forward as told to her grand neice Gowri Ramnarayan.